When you have been in an accident, Sidhu Lawyers are the ones to Call

Let Sidhu Lawyers Help You With Your Case

If you or someone you love has been injured in an accident, you may be wondering what to do next. You may be feeling overwhelmed and unsure of where to turn. The good news is that you don‘t have to go through this process alone. There are experienced Halifax personal injury lawyers who can help you navigate the legal process and fight for the compensation you deserve. Here are four reasons why you should consider hiring a personal injury lawyer:

1. YOU DESERVE AN ADVOCATE

2. YOU NEED SOMEONE WHO KNOWS THE LAW

3. YOU NEED SOMEONE WHO HAS THE RESOURCES TO HELP YOU

Personal injury lawyers have the resources to help you build a strong case. They have access to expert witnesses and can investigate the accident to gather evidence.

4. YOU NEED SOMEONE WHO WILL FIGHT FOR YOU

Insurance companies are often more willing to negotiate when they know they are up against a tough opponent. A lawyer will fight for you to get the best possible outcome. If you or someone you love has been injured in an accident, don‘t go through it alone. Consider hiring a personal injury lawyer to help you fight for the compensation you deserve.

Personal injury lawyer Halifax at Sidhu Lawyers are here to get you the legal advice you need. As a group of independent barristers and solicitors in Halifax, our team has years of experience paired with a diverse legal skillset to give you our help. Allow our engagement in personal injury law to work on getting you a quality result for your case in an efficient and timely manner. The team at Sidhu Lawyers works tirelessly for you with an unparalleled work ethic as we strive to be the trusted legal team in Halifax NS B3A 4S5.

We at Halifax & Nova Scotia Personal Injury Lawyers, know that accidents don’t work a 9:00 AM – 5:00 PM schedule, and neither do we. Our dedicated team of personal injury lawyer Halifax will work around the clock and your schedule to ensure our help is there when you need us the most.

Sidhu Lawyers are the lawyers who fight to get you the expected possible outcome for your case. Call us today to discuss your case and see how our injury law professionals provides our clients with fair results and client care.

THE 7 STAGES OF THE PERSONAL INJURY PROCESS AND WHAT COMES NEXT?

This is the stage where you will gather evidence to support your claim and discuss the accident with your lawyer. Your lawyer will also send a demand letter to the at–fault party’s insurance company.

If the insurance company denies your claim or offers an unfair settlement, your lawyer may file a lawsuit on your behalf.

During discovery, both sides will gather evidence and take depositions. This is also the stage where settlement negotiations may take place.

If your case does not settle during discovery, it will proceed to pretrial. During pretrial, both sides will present their evidence and argument to the judge.

If your case does not settle during pretrial, it will proceed to trial. During trial, a jury will hear evidence and arguments from both sides and render a verdict.

If either party is dissatisfied with the verdict, they may file an appeal.

Once all appeals have been exhausted, a final judgment will be entered. If you’ve been injured in an accident, it’s important to consult with a personal injury lawyer to discuss your legal options. 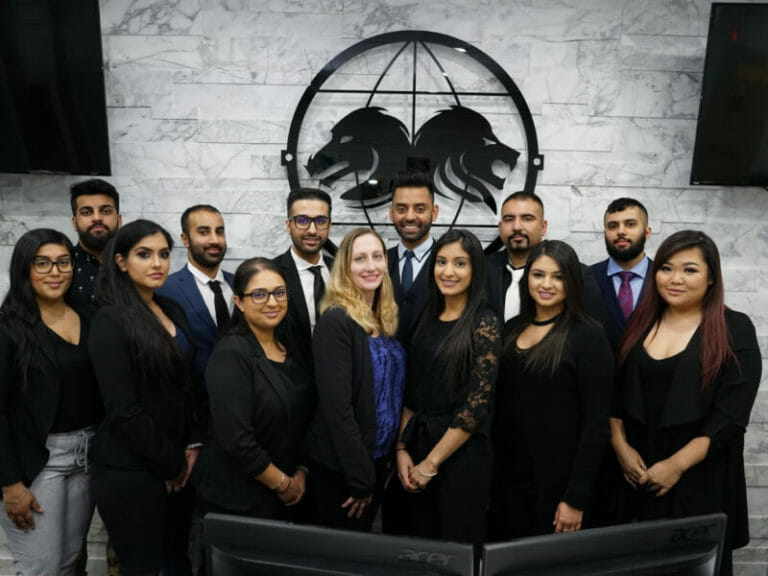 We work with our clients, providing legal services when they need them. Our legal professionals are here for you.

Working Harder for You

Sidhu Lawyers are here for you and your family when you need us. Schedule a case evaluation with our legal team here in Halifax to discuss your claim or potential legal case. Sidhu Lawyers’ diverse legal backgrounds provide the people of Halifax with a knowledgeable team who has their back.
SCHEDULE A CASE REVIEW

Don’t Struggle With Your Injury Case Alone – Get A Lawyer!

Are you looking for a personal injury lawyer in Halifax? If you’ve been damaged and are thinking about filing a case, you must find the right lawyer to represent you. Unfortunately, not all personal injury attorneys are created equal, so it’s essential to do your research before choosing one. When selecting a personal injury attorney, a few things to contemplate are their experience and track record. It’s also essential to find someone sympathetic to your situation who will be there to defend you through the process.

WHAT IS A PERSONAL INJURY?

A personal injury damages the body, mind, or emotions caused by another person’s negligence or defective or dangerous products.


To file a personal injury lawsuit and gather compensation, you must prove that the injury was caused by a person or company’s negligence and that you were harmed in some way. Possible damages could include property damage, pain and suffering, and lost wages.


The most typical types of personal injury claims include:

WHY MUST HIRE A PERSONAL INJURY LAWYER?

Being injured is an emotional time. But, no matter how minor your injury is, the last thing you need to worry about is the following legal proceedings. That’s where a personal injury lawyer can help.

An experienced personal injury lawyer can provide you with the emotional support you need and guide you through the legal process. They can make sure that you get the compensation you’re entitled to and will work hard to bring you the most suitable possible outcome.

Below are four reasons why you should pick Halifax & Nova Scotia Personal Injury Lawyers for your injury claim:

Our experienced team of personal injury lawyers has been helping clients in Nova Scotia with their injury claims for more than two decades. We know how to proceed with your claim, and we’ll make sure that you get the compensation you deserve.

WE LISTEN TO YOU

We listen to our clients at Halifax & Nova Scotia Personal Injury Lawyers. We don’t just want to read your story, but we want to hear it. That way, we can get a clear picture of your accident and know how to proceed with your claim.

WE’LL WORK FOR YOU

We’re more than just a law firm. We’re a team of personal injury lawyers who work hard to get you the settlement you deserve. Our lawyers will work tirelessly to ensure that you get the compensation you’re entitled to.

When you hire a personal injury lawyer, you won’t worry about your lawyer’s honesty and integrity. Our team will always be upfront with you, providing you with all the information you need to decide. But, of course, we’ll also let you know how we will proceed with your claim.

Our Halifax & Nova Scotia Personal Injury Lawyers lawyers will help you get the compensation you deserve. Need a personal injury lawyer? Call us today at (782) 830-5834.

Shawn is an upstanding guy - full of energy and always extremely responsive. He loves what he does and does it extremely well. Overall rating is 10/10 on all levels (professional and personal).
AMAND
Working with Shawn and his team made a bad situation bearable. Kind, friendly and compassionate.
DUSTIN
Hard to find good lawyers these days and especially hard to find good kind-hearted people. He took my claim with open arms and has been extremely helpful in answering all my questions and concerns. I would highly recommend to anyone NG Sidhu Law firm, top class people and very good at what they do, keep up the good work Shawn!
JORGE
One of the most personable..honest lawyers you'll ever meet.. willing to go the extra mile.. keep up the great work Shawn!!
JAG
Shawn and his team did a great job of helping my family through their claim. They were supportive and delivered great results, any question asked were thoroughly and professionally explained.
SHARON
Previous
Next

How Do Personal Injury Claims Work?

A personal injury claim begins when you contact your injury lawyer. You should explain the circumstances of the accident and your injuries. The lawyer will take down your story and ask you for any relevant documentation.

If you don’t have copies of the accident and injury reports, get them as soon as possible. If you didn’t write them down at the time, have someone who was there describe the accident to you so you can write it down.

Your lawyer will then evaluate the details of your claim and let you know if you have a case or not. If you do, they will tell you how your claim will proceed and give you an estimate of what your settlement could be.

How Frequently Do Personal Injury Claims Go to Court?

It depends on the type of personal injury claim. Some claims can be settled outside of court, while others will likely have to go to court. If your case goes to court, your lawyer will let you know if you need to attend the court hearing and set up a time to meet the lawyer again before the hearing.

Personal damage lawsuits can take a long time, especially if they make it to court. If you have a claim that involves a lot of paperwork, it can take months before your case is settled.

When Can I Claim a Personal Injury?

Generally speaking, any injury caused by another person’s negligence can be claimed as a personal injury. An injury doesn’t have to be serious to be claimed either. If the accident was someone else’s fault, you could go after compensation.

Most personal injury claims are valid as long as you can prove that you were injured and that the accident was someone else’s fault.

How Do I Know If I Have a Personal Injury Claim?

Your injury lawyer will let you know if you have a case or not. If you do, they will tell you how your claim will proceed and give you an estimate of what your settlement could be.

If you don’t have counsel, you can call us at Halifax & Nova Scotia Personal Injury Lawyers for a free consultation. We’ll let you know if you have a case and will help you get the damages you deserve.

What Is the Function of an Injury Lawyer?

An injury lawyer will help you deal with the legal process of your claim. They will tell you how your claim will proceed and help you get the settlement you deserve.

Legal terms can be confusing, and the legal jargon can be overwhelming, mainly if you’ve never dealt with a legal matter before. An injury lawyer can help you understand the legal process and guide you through each step.

If you have a personal injury case, you should find a lawyer willing to go the extra mile for you. That’s why choosing a lawyer you trust is so important. In addition, your lawyer should be sympathetic to your situation and be there for you through the entire process.

Where Can I Look For a Personal Injury Lawyer in Halifax & Nova Scotia?

Halifax & Nova Scotia Personal Injury Lawyers has been helping clients in Nova Scotia with their injury claims for more than two decades. Our experienced group of personal injury lawyers has the experience you need, and we’ll make sure that you get the compensation you deserve.